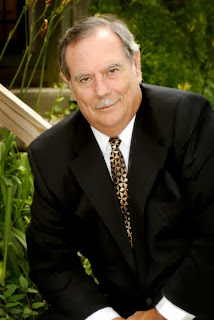 Today we are lucky enough to hear from author R.C. Larlham. He is going to talk about his new release, ‘The Old Man and Me.’

Please tell us a little about your new release? When is it scheduled to go live?

‘The Old Man and Me’ was released on September 19. I'm not sure what "released" means, because it took me another ten days to get copies of the book. Meanwhile, I was biting my fingernails, back to the elbows.

As far as the book goes, let’s start with the fact that it’s not really a novel. The Old Man and Me is a book of true short stories ... a memoir of mostly my boyhood and teen years in the '40s and '50s.

Tell us about the cover of the book. Is there any history there? 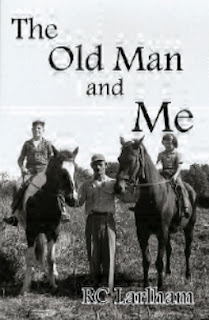 The cover photo was chosen by Black Rose's people out of about two-dozen I sent them. We boarded the two horses for the winter one year. The little black and white pinto was a mustang named Domino. He was a wild horse, captured when he was about four-years-old. That's me riding him. I think I'm about thirteen years old. The brown mare my sister Lyndella is riding was a harness racer named Tango. A harness racer is a racehorse, which trots or paces around the track, pulling a two-wheeled "sulky" with a driver instead of a rider. Tango, unfortunately, was subject to nosebleeds. Both horses were owned by a day camp. No one who rode them knew anything about horses. Both horses pretty much cordially hated children. The man holding the horses for the photo is “the old man,” Dick Larlham, my father.

2) What inspired you to write your novel?

I had pretty much given up on inspiration to write a book of any sort. I'd tried novels, but I always got bored with them. However, I am, and always have been, a storyteller. My daughter introduced me to an Internet site called Gather, which catered primarily to storytellers. I began to write some short stories and poems in response to various prompts (themes for the month in various genres), but some of them were pretty outrageous, and some were of no interest to me. However, I discovered that I could simply tell whatever story came to mind and publish it for folks to read and comment upon. So, I did it a lot.  As I wrote stories about my years growing up in the 1940s and 1950s, people began to comment that I should stop and write a book. My response was always that stories were the best I could do.

Do you have any writing rituals?

Yes, but they're pretty loose. If I'm working on book two of the memoir, I'll start by sort of mining my memories for basic events that happened, and then write down two or three sentences for each of them. Just give me a glass of ice water and a full 1 1/2 ounce shot of Bushmills over ice sitting next to the computer and I'm ready. I write narrative style, front to back. I do some go-back as I remember details so I don't forget them, but mostly I do a second read and write as soon as I've finished the first. I can finish-write about a thousand words in about three hours.

Are you a plotter or a pantser?

I am most definitely a pantser. This may explain why I get bored in the middle of my novels. I don't know where they're going next.

Do you have any new projects on the horizon?

Oh yeah... ‘The Old Man and Me’ is envisioned as a three (or more) volume series of overlapping books. Book two carries the subtitle, ‘Stories I Didn't Get To Tell You.’ It begins with several new high school stories, adds more college and Army stories and then moves to marriage and graduate school in the isolation of Northern Utah. I married the prettiest girl in Hiram College. She was a sophisticated young lady from Falls Church, Virginia and I plunked her down in a place where they got ten feet of snow every winter and religious prejudice was the reverse of anything she'd ever experienced. Not my best plan by a long shot.

Do you have any advice or aspiring writers?

Write every time you can (and some when you can't). When I'm not working on editing a finished manuscript, I try to write a thousand words a day. Sometimes the whole thing gets junked the next day, and sometimes two or three days' worth will yield one good thousand-word chapter or story. But I write them.

Do you have a muse?

I have the lovely Laura. We were married forty-four years before she had to go. When she died, I nearly crawled into a deep, dark place in my head and pulled it shut behind me. But I wrote about her instead. I wrote about our life together (the good and the awful), about her long fight against MS, her failing end, and her final hours. And all that kept me sane. If I couldn't have written, I don't believe I would have survived emotionally. Now, she rides my heart and keeps me writing.

Please tell our readers where they can get more information on your books.

Well, they can begin by visiting www.blackrosewriting.com/books and buy directly from the publisher. Through November, there is a 25% off sale in which they can participate. The book is also available through Amazon.com, Barnes&Noble.com, Smashwords and other e-book platforms.

Well, looks like our time is pretty much up. Thank you so much for the opportunity, Judy. I enjoyed this very much. Good Reading!

Posted by Judy Serrano, author of The Easters Lilly Series, and The Linked Series. at 1:04 PM