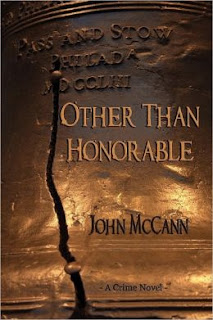 Tell us the title of your book and a brief description of what the book is about.
My book is titled, 'Other Than Honorable.' It is a crime novel set in 1983 in Philadelphia. It has equal parts of murder, mafia and romance. Here’s the synopsis:
It's 1983 and the Russian mob is seeking to expand by securing the cooperation of the ambitious Mayor of Philadelphia, Michael Collins, a decorated Vietnam Vet and rising political star. When Collins hosts a meeting of the National Democratic Committee (DNC), the Russians see an opportunity.
Everything changes when a young woman is found dead in a crime-infested section of Camden, NJ. Solving the murder requires the cooperation of three estranged friends: Mayor Collins, an FBI Agent, and another Vietnam Vet with a tarnished military record. The FBI enjoins the Philadelphia and Camden Police to solve the murder amidst a violent turf war between the Russian and Italian mafias.
That sounds very intriguing. Can you tell us a little bit about yourself?
I was born and raised in the hardscrabble Kensington and Lehigh section of Philadelphia, where several scenes from the movie, “Rocky,” were shot. Later, my family moved to the northeast section of the city. I went to two local universities: St. Joseph’s where I earned a BA English and Villanova where I earned my Master’s in political science.
Very few people know that I was a conscientious objector to The Vietnam War and served as a field medic there with the 34th Engineers from 1970 – 1971. I retired in 2009 after 40 years of service in various management and executive positions in the U.S. government. For 25 years, I was also an adjunct instructor at the Haub School of Business at St. Joseph’s.
Nowadays, I chase my wife and five rescue cats around the house and play softball often if not well. I have two children and four granddaughters.
Sounds like you live an exciting life. What are you working on now?
I just finished a draft of a second crime novel, ‘Death Boards.’ This book is also set in modern day Philadelphia. It is a serial killer genre but with a major twist or two.
Last month, I wrote two children's books for my two youngest granddaughters, who will be 6 and 8 shortly. They asked me to write books for them as birthday presents when they saw me give a draft copy of ‘Death Boards’ to their father to read. Little do they know he hasn't read ‘Other Than Honorable’ yet.
Have you patterned your writing after any other authors and do you have any writing rituals?
I don’t pattern my writing after any other writers, nor do I have any writing rituals. Many experts say an author should write at least a page a day or block out the same time spot every day. I don't do any of that. I write when I feel like it.
Every writer is unique in how they put a story together. Do you have a muse? Is there someone special who inspires your craft?
If I had to pick someone, it would Jonathan Swift. I liked him from the first time I read him. Political satire of all kinds is my favorite.
My love of the detective and murder mystery genre comes from my Mom and her Mom.
How does the social media influence your writing? Is it a hindrance or a blessing?
Social media has had no impact on my writing. Other than having a nondescript Facebook page, I don't participate in any social media outlets.
I think you are of the minority when you say that. Social media is quite the coo these days when it comes to getting the word out. Are you a plotter or a pantser? How long does it take you to write a book?
I am clearly the latter. ‘Other Than Honorable’ took five years to write. ‘Death Boards’ took me a little over two years. I don’t have anything to do with an outline. I never have.
I am the same way. My characters take me where they want to go, not the other way around. What is the hardest part about the writing process for you?
Thinking of a story that is truly unique or that has potential to tell an established plot line in a new direction. I also write with a view on whether the book has potential to be translated into a movie or cable mini-series.
If I can't land an idea in my head that can do that, I don't write.
Please tell my readers where they can find more information on you and your book.
The best way to contact me is via Email: pard1.mccann@gmail.com.
‘Other Than Honorable’ is available on amazon.com and barnesandnoble.com. Also, any independent bookstore can order a copy for interested readers.
I plan to put "Death Boards' on amazon.com in the Kindle Select Program next month.
Posted by Judy Serrano, author of The Easters Lilly Series, and The Linked Series. at 12:02 PM No comments: