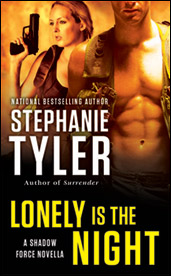 Lonely is the Night (A Shadow Force Novella) by Stephanie Tyler
Book Description:
Reid Cormier is a recently retired Delta Force Operator. He joined his former teammates to work black ops jobs around the world. Although he is busy, he can’t stop thinking about the last job he had because of the special woman who was involved.
U.S. Marshall, Grier Vanderhall, the woman Reid can’t seem to forget, faked her own death without telling Reid about it first. He couldn’t forgive her for her betrayal. When Reid finds out that Grier is in trouble, he can’t think of anything else but rescuing her from her captors. Although he is hoping that he is the able to bring her back, he is unsure if either one of them will make it out alive.
My review:
Reid and Grier are a very dynamic couple in the previous novel, 'Night Moves.'Stephanie Tyler does a wonderful job with her ‘Shadow Force’ series. 'Lonely is the Night' is the closure that was needed between Reid and Grier. They were the only couple that didn’t end up happily ever after in the entire series.
Stephanie’s novels are always thrilling. She usually runs three storylines at the same time that are independent yet related. They are full of excitement and steamy romance, and will keep you turning pages until the very end. In this particular novella, Grier is in charge of watching someone who is a witness to an illegal fighting ring. Without giving too much away, she gets kidnapped and her partner calls Reid, knowing he would want to help find her.
I gave this book 4 out of 5 stars only because of the length. I realize that she usually does three storylines and this was only one, which is why she categorized it as a novella. However, this did feel inappropriately short and it was over way too fast. Usually her mysteries and wild rides are longer and more intricate. She is one of my very favorite authors and this book is certainly a must read for ‘Shadow Force’ fans. You will want to see how it ends and they are a great couple. Just wish it was a little longer.
Posted by Judy Serrano, author of The Easters Lilly Series, and The Linked Series. at 6:38 AM