‘Thoughtless’ by S.C. Stephens will leave you breathless 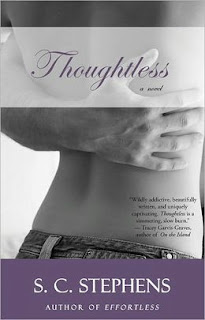 Book description:
Kiera’s first and only love, Denny, gets a job in a new city, far away from Keira’s home. Being that they are totally devoted to each other and have been for the past 2 years, she follows him out there, where they move in with Denny’s long-time friend, Kellan Kyle. Kellan is a local rock star with a well-known reputation as a womanizer.
Kiera finds herself a job in the bar where Kellan works and all seems like it is going smoothly until the unforeseeable happens. Denny is temporarily moved to a job in Tucson, leaving Kiera by herself, alone with Kellan Kyle. At first their friendship is innocent and heartening, but when Denny calls Keira with the news that he won’t be coming back, she finds herself looking for comfort in Kellan’s arms. Denny returns to make things right but is it too late for them? What will this do to Kellan?
My review:
'Thoughtless' is certainly a page-turner. Because I am also an author, I can’t really complain about the attractiveness of the main character’s personality. It reminded me of my own series, as the heroine simply could not make up her mind between the two heroes. It was painful to read as she hurt them both over and over again with what appeared to be very little remorse. Kellan broke my heart. Coming from a place of complete and utter detachment, he opened up to her in ways that frightened even himself.
Although the outcome was certainly predictable, the anticipation to reach the conclusion was overwhelming. I took the book with me everywhere I went, unable to put it down and stop reading. The chemistry between the characters was very well written. I could see the whole book playing inside my head like a movie. I gave this book 5 out of 5 stars and have already started reading book two of the series, 'Effortless.' This is actually a trilogy but I didn’t buy all three just yet. I loved 'Crash' by Nichole Williams, but didn’t love the second book, 'Clash.' So, I will be taking it one book at a time this time. I will let you know how I rated it in May.
Posted by Judy Serrano, author of The Easters Lilly Series, and The Linked Series. at 11:13 AM